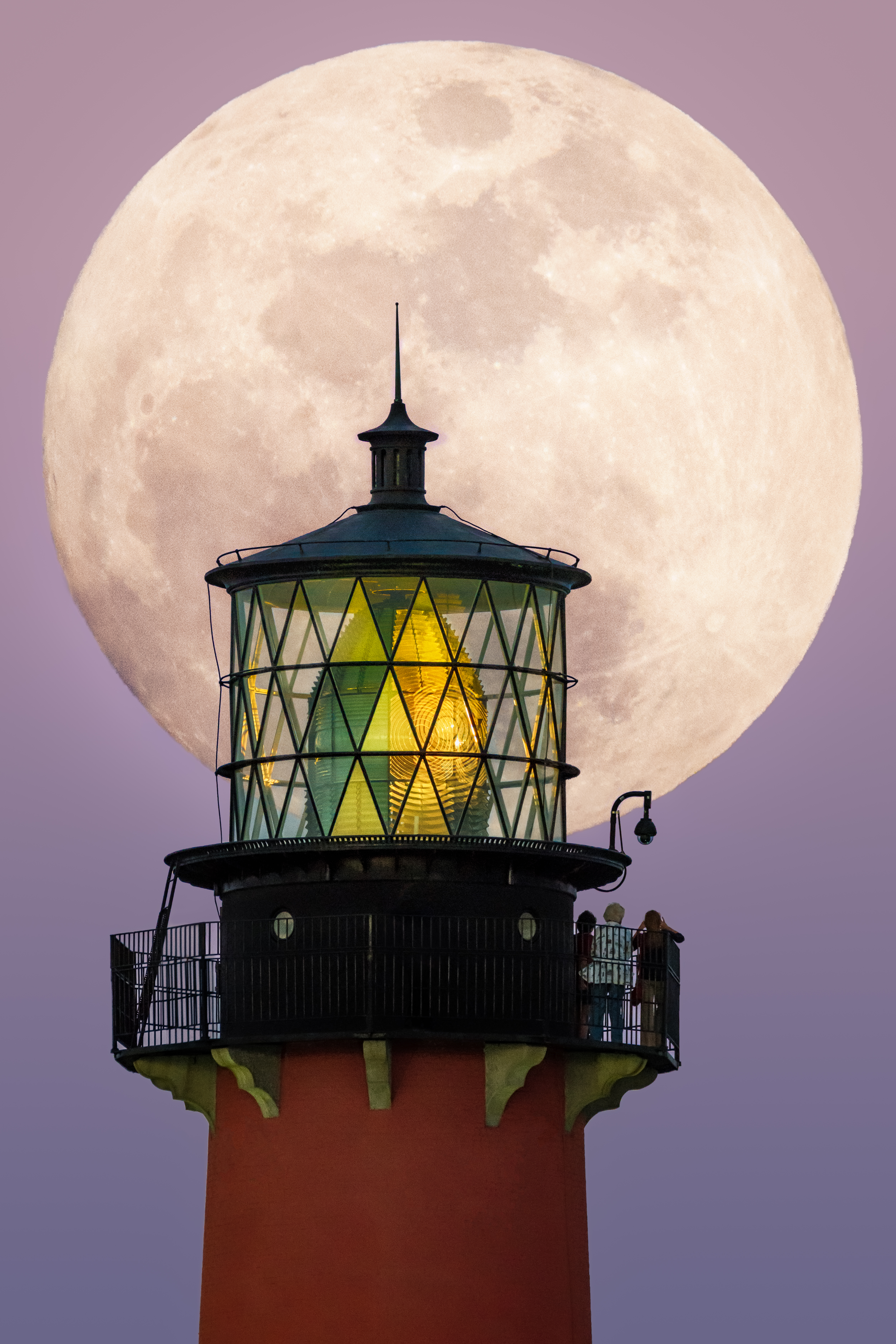 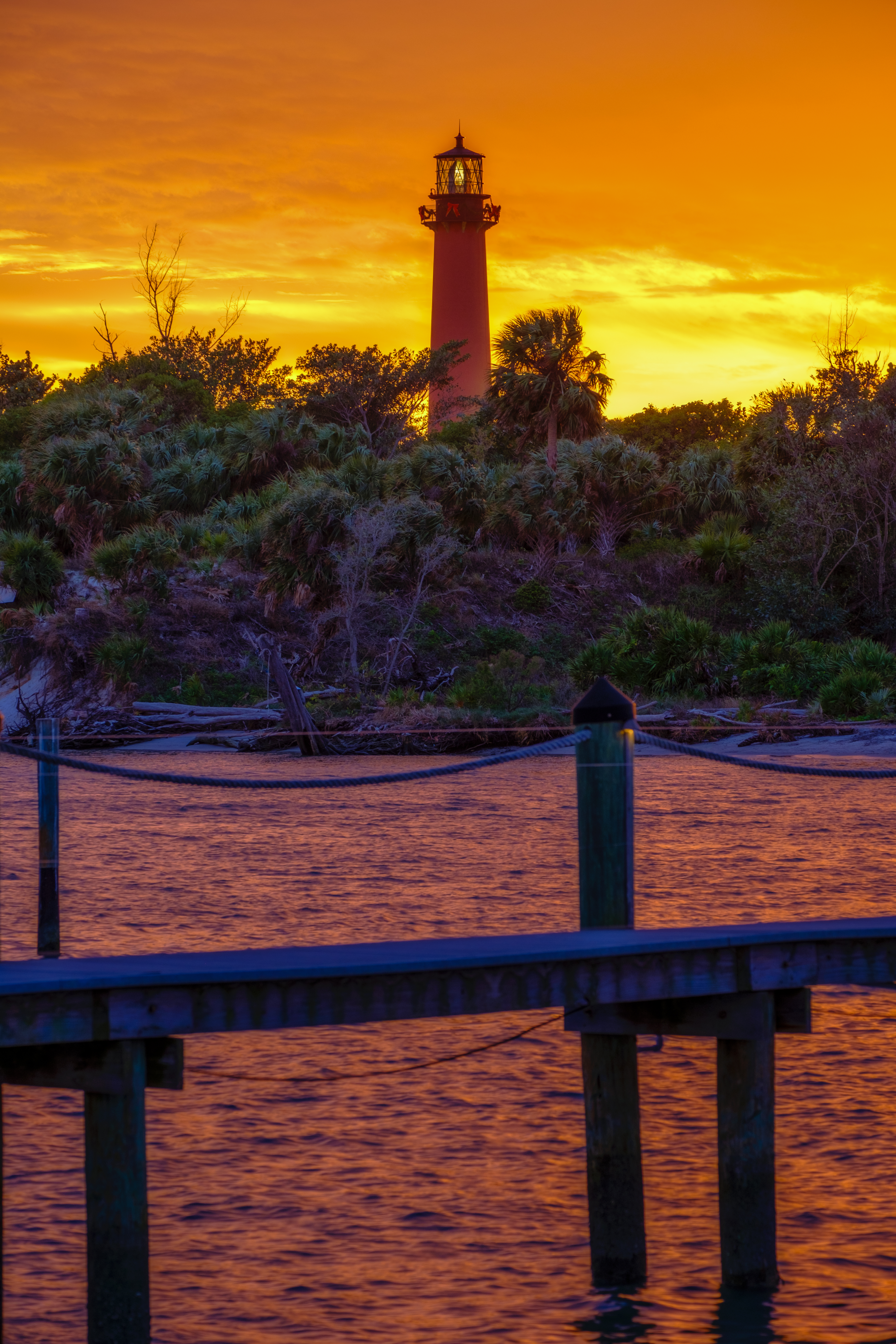 $35,000 was provided by Congress in 1853 for establishing a lighthouse "near Jupiter inlet, to mark the dangerous shoals lying of that point, and to guide vessels along that coast." The following year, President Franklin Pierce signed an order setting aside a 61.5 acre parcel for the tower near the junction of the Loxahatchee and Indian Rivers. The land was part of the Fort Jupiter Reservation, which had been established in 1838 during the Second Seminole War. Lieutenant George Meade of the Bureau of Topographical Engineers soon visited the site and submitted a design for the lighthouse.

The lighthouse was to be built atop a hill with an elevation of forty-six feet. Given the flat terrain surrounding the area for miles, the hill seems somewhat of an anomaly. During the restoration work in 1999-2000, archaeologists uncovered shells and pottery fragments in excavations made on the hill near the base of the tower. The artifacts are believed to be remnants of a Native American colony, dating from around 700 AD.

With the completion of the lighthouse plans, five hundred tons of building materials were assembled and shipped to the Indian River inlet, roughly thirty-five miles north of the Fort Jupiter Reservation. The supplies were then transferred to shallow draft scows, which carried the cargo across the Indian River bar. From there, it was a laborious journey through a shallow, narrow, and crooked channel to reach the construction site. This difficulty in transporting the construction material was just the first of several unforeseen difficulties in building the lighthouse.

In 1855, just as construction on the tower had started, a group of careless surveyors in the Everglades destroyed the prized banana plants of Chief Billy Bowlegs, touching off the Third Seminole War. Fearing an attack by the enraged Indians, George Meade requested small arms and ammunitions for his "unarmed and totally defenseless" laborers. Work on the lighthouse was eventually suspended due to Indian hostilities in the area, but in 1858 the conflict was resolved and construction resumed. The Indians, however, were not the only inhospitable neighbors to threaten the workers. With Jupiter Inlet silted closed, the stagnant water surrounding the site was a perfect breeding ground for a more life threatening foe - mosquitoes. Several of the men contracted "Jupiter Fever," a combination of malaria and yellow fever, and those that didn't still had to suffer through the "heat of the weather" and "swarms of stinging insects."

Brick by brick, the tower slowly rose to its preordained height of 108 feet. A circular stairway with 105 treads led from the base of the tower to the lantern room, where a magnificent first-order Fresnel lens manufactured in Paris by Henry-LePaute was installed. When revolving, the four bulls-eyes in the lens produce the repeating cycle of two flashes followed by a period of darkness.

A two-story dwelling for a head keeper and two assistants was built near the base of the hill in 1859. The edifice measured 26 by 30 feet and was built with stout, two-foot-thick coquina walls. A well was dug inside the dwelling so the keepers would not need to venture outdoors in the event of further troubles with Indians.

After $60, 859.98, almost twice the original appropriation, was spent on the construction work, the lighthouse finally commenced operation on July 10, 1860. It wasn't long however, before work at the lighthouse was again interrupted by war - this time the Civil War. In August of 1861, a "band of lawless persons visited the Jupiter Inlet" Lighthouse, and "removed therefrom the illuminating apparatus." It is unclear exactly what was removed, but the light remained dark throughout the remainder of the war. The missing parts of the "illuminating apparatus" were recovered in a palmetto hammock near Lake Worth creek by Captain James A. Armour. After the war when the light returned to operation on June 28th, 1866, Captain Armour was appointed an assistant keeper under William Davis.

In 1867, Captain Armour persuaded Almeda Carlile to be his bride and relocate to the remote Jupiter Lighthouse, where she would be the only white woman for a radius of one hundred miles. The Armours would have eight children at the lighthouse, the oldest of which, Katherine, would marry Joe Wells an assistant at the lighthouse under her father. Joe would succeed Captain Armour when he retired in 1908 after forty years as head keeper. The small cemetery near the lighthouse contains the stillborn children of Joe and Katherine Wells.

On October 20, 1872, the steamer Victor broke a shaft off Jupiter during a storm and was driven ashore south of the lighthouse. The passengers and crew made it safely to shore, but soon thereafter the vessel started to break apart spilling its valuable cargo into the water. This unforeseen bounty provided the keepers with a Wheeler and Wilson sewing machine and three dogs, which they named appropriately Vic, Storm and Wreck.

In 1881, it was officially noted that the keepers' dwelling was "old and dilapidated, and too small for three keepers." The following year, the report reiterated that the "old dwelling is dilapidated and requires extensive repairs, but when repaired will still be too small for the keepers." Finally, in 1883 a two-story frame dwelling with a gallery on three sides was constructed, and the old dwelling was "thoroughly repaired and made good as new."

Captain Charles Seabrook became head keeper of the Jupiter Lighthouse in 1919, a position he would hold until ill health forced his retirement in 1947. During his watch, a fire destroyed the original keepers' dwelling in 1927. The tower was electrified in 1928, but the keepers soon discovered that electricity wasn't always as reliable as an oil lamp. On September 16, 1928, reports were received of a powerful hurricane bearing down on Florida's southeast coast. By that evening, the winds had reached gale force, and the power to the lighthouse reservation failed. The backup diesel generator wouldn't start, and the tower would have remained dark that night, if Captain Seabrook, in spite of a badly infected hand, hadn't installed the old lamps inside the lens. There was still one more problem. Since the weights had been removed earlier that year, there was no automated way to rotate the lens. Noticing red streaks running down his father's arm from his infected hand, sixteen-year-old Franklin Seabrook volunteered to perform the needed task. While trying to climb the steep stairs leading up the hill to the tower, Franklin was blown back four times. Then, once safely inside, he had to ascend the tower, which was swaying an estimated seventeen inches at the top. For four hours, Franklin manually rotated the lens, timing the revolutions as accurately as he could. As he worked, he could hear "cracking sounds as the mortar was ground out from between the bricks by the working of the iron bolts holding" the lantern room. During the storm, glass panes in the lantern room were shattered and one of the lens' bulls-eyes was blown out. Through all this, the light did not go out.

Captain Seabrook had the damaged bulls-eye shipped to Charleston where it was reassembled and fitted with iron crossbars to hold it together. The repaired bulls-eye was then reinstalled in the lighthouse. In 1931, Captain Seabrook planted the Banyan tree near the remaining dwelling. The tree is still thriving today, though the second dwelling was torn down in 1959.

Public tours of the Jupiter Inlet Lighthouse, which continue to this day, were first offered by the Loxahatchee Historical Society in 1994. The oil house has been converted to a small historical museum, and a building outside the station serves as a gift shop and meeting place for the tours. The tower underwent an $850,000 restoration in 1999-2000, which made this oldest of structures in Palm Beach County look just about as good as new.

In May of 2008, the Jupiter Inlet Lighthouse and surrounding land was designated a federal Outstanding Natural Area. While the recognition was appreciated, money for improvements was what was really needed. As part of the federal stimulus program designed to jump start the economy, $1.1 million was set aside for the natural area in 2009. These funds will be divided almost equally between maintenance of the lighthouse and habitat restoration. The interior of the tower will be painted, and the adjacent oil house will be completely refurbished. Walking trails, wooden overlooks, and informational signs will also be added to the property.